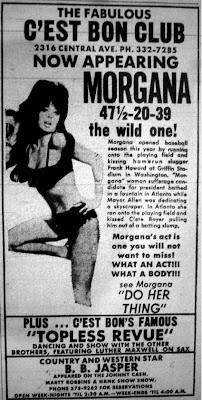 "Hi Girls. It's so hot outside I thought I'd take a stroll downtown today in my new bikini."

The text of the ad in the Charlotte Observer was accompanied by a particularly busty shot of a mod bikini-clad vixen sporting spiked heels, a shoulder bag and a
head full of shoulder-length black locks that were ratted on the
top with heavy bangs in front — in keeping with the style of the
time.
She was, and probably still is, Charlotte’s most infamous
celebutante — not too different from Paris Hilton — someone who’s
famous for being famous. Just like Hilton — she was in the habit
of doing the outrageous for fun and attention. And as much as
Hilton adores the benefits of wealth, so did she.
Known alternately at different times and places as Morganna The
Wild Thing, Morganna The Wild One and Morganna The Kissing Bandit —
chances are — if you’re somewhere over 35, one of those names will
ring a bell for you.
Morganna Roberts — aka Morganna Cotrelle, Ruby Delmar and Nancy Lee
Rose — was an infamous character on the Charlotte scene from the
late 1960s to the late ‘70s.
A professional strip-tease dancer known for her ample endowments,
she performed regularly at nightspots popular during the era like
the infamous C’est Bon, the Zanzibar and the Mardi Gras Club.
It was a period in Charlotte history when most of the names popping
up in the Charlotte press were often a bit more wholesome: TV host
and homemaker Betty Feezor, features columnist Kayes Gary, musician
Arthur Smith, mayor and businessman John Belk, cowboy TV show host
Fred Kirby and children’s entertainer Joey the Clown.
Reportedly born in Louisville, Kentucky on July 4, 1947, Morganna
arrived in Charlotte sometime in 1968.
“I didn’t meet her until 1971,” says Ricky Carter, who would later
work with Morganna as the host of a strip tease act she would do at
the C’est Bon.
“She moved here with her mother and a couple of kids, though I
don’t think a lot of people were aware of that. Her mom took care
of the kids while she was out working.”
Carter recalls socializing with Morganna on a number of occasions.
“We would always ride around in this big red Cadillac convertible,”
he recollects. “She never went anywhere without being completely
made-up and looking fantastic. We’d go out to dinner or clubbing
and she would always get so much attention. She couldn’t get away
from it. Not that she really wanted to, anyway.”
Although stripper Morganna was already well known locally for her
micro-bikini forays across Trade and Tryon that would send
businessmen flocking to the street corners, it was at an Atlanta
Braves Game in September of 1969 that she first caught the
attention of the national media.
At the joking insistence of a friend, she climbed a fence at
Atlanta’s Fulton County Stadium and planted a kiss on the Braves’
third baseman Clete Boyer.
“It wasn’t a planned publicity stunt,” Morganna told the
Posted by David Aaron Moore at 9:27 AM